Initially, we were afraid of feeling misplaced in a quarter which struggles with drug related violence, unemployment and low school attendance. We did not find a strongly unified community but we observed numerous acts of generosity and support among individual residents. Merchants and neighbors have constructed their own system of support. We were introduced to the Panchitos gang and to the cultural center Faro and from our living room stand on Sur 128, we got to know América’s neighbors and they joined us in our investigation of Solidarity in the neighborhood.

The people on the streets were the eyes and ears of the neighborhood. We met loud and quiet voices, approached some neighbors directly, some were introduced to us, others saw our living room stand and curiously sat with us. Caring locals guided us about dangerous and secure areas of América. We learned different perspectives of the neighborhood from youthful to more experienced ones. We talked with local heroes, who regulated traffic and provide the neighborhood with paper, Adidas caps and Nopal salad. We listened to complaints and documented fears. We witnessed small favors and people caring for each other. We had conversations with residents about the economic crisis and our role, as visitors, in América. Every day we worked and discovered intuitively and curiously, without agenda, but always through the lens of solidarity and cooperation.

To catalogue our observations of solidarity in América, we created a newspaper, Calle Sur 128. The paper is named after our weekly stand on the corner of Poniente 73. It displays personal anecdotes, neighbors‘ paintings, interviews and reports of our activities.

Our collaboration was based on conversations and encounters and celebrates the sharing of knowledge through joint activity and discussion which developed when strangers sat at a table and talked about the city and their neighborhood.

Pere’s warm smile and tiny stall on the main street of America caught our attention. He showcases a collection neatly laid out on his cart, of hand-carved wooden spoons, chocolate coffee stirrers, hand-decorated tortilla presses, matches, blocks of cocoa, bags of roasted peanuts, and raw garlic bulbs. “This is what sells”, he explained. Pere has been doing this for four years, using a tarpaulin for shade, plastic beer crates for seats, and a papaya tree for company.

He buys his supplies from the Central Market, and rents a space to store them over night. He started his business to support himself, “when you are older than fifty and did not get an education, it is very hard to find a job” he says. Before starting the stand, he worked as a taxi driver and as a worker in a factory.

When we noticed a tray of bread on his table and asked if he was selling it, “No, I’m looking after it for the bakery lady, she had to go somewhere.” He said. It is the small favors that bind people together, here.

Maria is one of the most experienced vendors on Calle Sur 128. We imagine that she could illustrate her surroundings from memory because she has operated her stand from the same spot for about 45 years. On her light blue wooden stand you can find flowers, a selection of vegetables and homemade Nopal salad. Her husband helps her carry the products to the stand every morning and back, every afternoon.

She is her own boss, she says, taking time off when she’s sick or needs a break. For short periods of time she entrusts her stand to Perico and Barbara, who have operated the stands at her side for the last 15 years.

Maria says that she likes to work outside and with people. She recognises most faces in the market and has seen them growing from young to old. The neighborhood has changed a lot since she founded her stand, and she stays for better or for worse as time bonds her to the neighborhood and the community. “You have to know how to live with the people,” she says. “Sometimes this is missing, knowing and treating others well.” 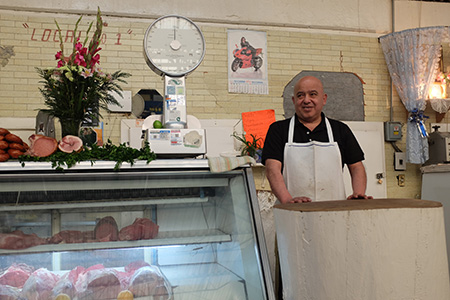 Victor Manual Mota is a 50 year old butcher, who comes from a long line of butchers. Processing meat is a tradition, which has been shared and maintained by his relatives throughout the country. Manuel was born and raised in the neighborhood. He has sold his produce at the Mercado América on Calle Sur 128 for 20 years.

“Choosing a proper piece of steak or roast is not an easy decision,” Manuel describes his work as a dialog between himself and his customers. He is responsible for the quality and price of his products and wants to satisfy his patrons.

“In here, there are no financiers. We are all our own bosses.” Next to Victor’s stand there are several other butchers but he says, “We are companions. It is only a fight for prices and quality, otherwise there is friendship and we give each other a hand when needed.” 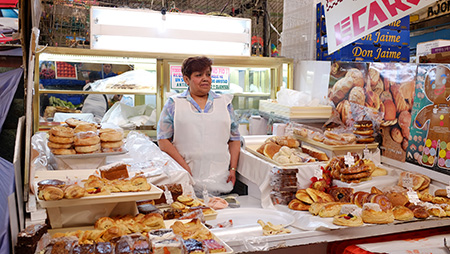 On her modest stand, the 61 year old lady offers a collection of sweets, pastries and bread everyday. Keeping up a family tradition, she works with her husband and sister-in-law. They buy their goods at a central market. There was a time when Magdalena did the baking herself in her own kitchen, “Not anymore,” she explains, “it is very time consuming”.

To Magdalena, the mercado is not just a location for her business. She describes the atmosphere as comforting and says, “The vendors here are like a family”.

Eddi started the Papeleria with the support of his family in 2014. With the help of the local carpenter, he designed and built all the furniture. There are many goods in the shop: miniature rock collections, paper and polystyrene models, snacks, and pens. Everything has a hand-written price tag while the wall is covered with a hand-painted diagram of the human body. He is a man of great patience and has a knack for precise work. He also taught himself English by reading in his shop, listening to his favorite music all day, watching films and reading magazines.

During one of our visits he was gluing a paper model of a house, which included tiny paper chairs gathered around a small dining table. He explained that the shop is doing well because it is near a main-road where children cross a skyway on their way to school, “School children often realize that they’ve forgotten their school materials and end up buying it at the shop”.

The Tlacoyo Stand of Mercado America

Tlacoyo is a regional dish made with blue corn flour formed into a thick circle, cut through the middle and filled with delicious salsas, meats, beans and cheeses. The stand consists of an umbrella, a gas tank, a hot plate, and a small table with an assortment of toppings. It looks temporary but has been there for 35 years and is run by a mother and her two daughters who take turns tending to it during the week. The family lives an hour and a half from America, where they grow the blue corn. They explain that it is worth the commute because the stand is located at the market’s busiest entrance and the seats are never empty.

Our relationship started with a shy conversation at their doorstep. Through our new friends Carlos, a collaborator from the local university we got to know Barbara and Perico on the very first days after we arrived in Mexico. They basically made us their family, added 6 new friends to their big neighbourhood network, their children, their relatives. These two characters became so important and inspriring to us, because it cannot be stretch enough how important friendship is to get started and confident in anthropological research and atlthough to managed to keep at it.

Both born in the bordering colonias América and 16 de Septiembre they became a couple after meeting at a Panchitos party. The local gang, who started as RocknRoll loving youngsters who frequently got in violent trouble with law and other „bandas“ got more relaxed with growing age of their members – still enjoy Punkrock, a bottle of Dos Equis beer and to celebrate their strong bond whenever they see each other on the street or a favourite song is playing. Barbaras brother and Perico being members gives them even today high reputation and especially a feeling of security to them and their family.

We as newbies in the quarter stumbled over people relating themselves to the Panchitos at every corner, finding ourselves involved in their love for group pics and super emotional chat about old times and new commitment to social community work.

Barbara was our partner in crime day in day out in developing our stand and getting bypassers to talk. This neighbourhood is her home, even though it took a while for her to settle in. While she gave us confidence due to being a beautiful host out on the street next to their stand where they sell sportclothing for a living and in her home which they builded for a lot of years, we developed a deep belonging. In contrast her partner Perico is a quite yet cheeky man who maybe found our research rather abstruse but still helped and embraced us without batting an eye.

Thinking of old wild times, they both can get a little sentimental, not missing the violence but the intensity and togetherness. Pretty much exactly how I feel about América when writing this text and trying to communicate others how loved we felt.

It’s a quite personal story we share with this family but it allows to deviate multiple conclusion professionally and emotionally. An open table creates most fruitful encounters. Without door openers their is no on site research. Without sharing your story in a critical manner others have no reason to share theirs and foremost we can not work on detect colonial traces and manners only amongst ourselves.