Above: Katherine Ball’s contribution with comments by participants during Lexicon session on June 15 2018

How can we mediate forms of situated knowledge that is associated with spatial practices? The Floating University Berlin is a spatial process moving across spaces which are usually kept apart – the kitchen and the study, the bar and the auditorium, the hot tub and the library, the laboratory and the street, the university and the park. How can we name and capture the ​movement between thought and practice?

The ​Floating University Lexicon is edited by Gilly Karjevsky. 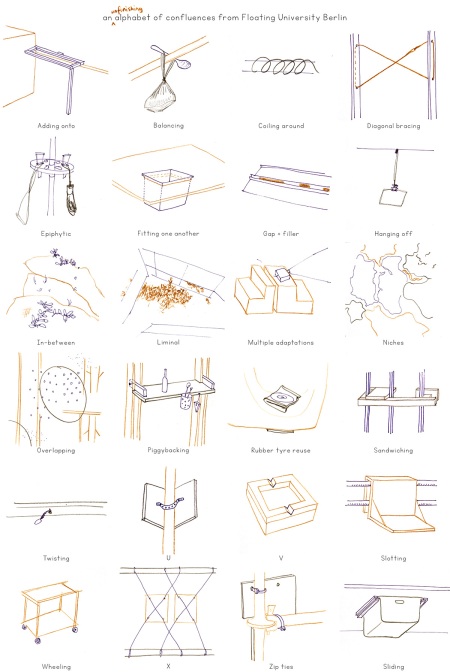 AnthropoZen, Distraction Concentration, NON (to) [as a verb], and Previous Practices by Felix Egle

AnthropoZen
Human influence on the global system is a specific phenomenon. It seems to consists of layers of different spheres. The era of Anthropo – the time of human beings existing – can on the one hand be a spectacular moment in lives development that brought reflecting, , inventing, designing and constructing beings to become a global scale factor. On the other hand mankind shaping the global surface, atmosphere, space and psyche feels threatening and destructive to a lot of natures other beings. Amongst them also a lot of humans.

Can we stay Zen within it? Should we? Or should we fight against the Capitalocene and extractivism? Should we clamly observe or get angry rightnow? How can we live with the harming results of our species actions? Should we focus on ourselves? Should we only reflect and continue eating? Or should we get mad, get out and struggle for a holobiont – all is living – ZenAntropo?

Distraction Concentration
Ecological systems are not productive. They do not follow demand and supply market ideas, yet they manage to adjust in multitude of ways. Selforganizing biodiverse systems establish dynamic balance between individual and collective desires and needs.

Herein these systems are contrasting capitalistic ways of production, they are not efficient but porous, morphing and undecided. Not straight but queer not stable but moody and emotional.

Applied to space “Distraction Concentration” seeks to describe a mode of pattern like assemblies that are following a range of contradicting urges at the same time. In interaction they create a whole distracted concentration of unique individual elements, that in their sum make up a whole.

NON (to) [as a verb]
e.g.: NON-consume but interaction and exchange. By adding the prefix NON a certain ideom can be rejected, neglected and negotiated, reversed and discussed. NON-understood but thought about ex negativo. NON-destroyed but taken apart, reassembled, restructured and rethought. NON is a tool to think the exact other to understand the previous.

There can be at least three modes of NONing.

1. intentionally ignoring a given topic. Trying to convince
yourself and others that the negotiated thing is not even
there. Non-existing. Or convincing ourselves that sth is
eventually something completely different

2. to reject the object. Here NON-sth means to consider it highly
problematic and aiming at abollishments. NONing here seeks to
transcend its reflectional cause and turns active. Non-accepting.

3. changed function. Sth has been sth, but with history developing
itself It transformed. Turned NON-identical in relation to its
past identity.

If we do not give a practice a name though it can exist besides thought. It can just be a practice that is non-approachable to change. Depending on the practice this might be great and valuable or the worst thing to do. Also to consider the previous practice sth to reflect on Now enables us to redecide if we want to keep it previous or if there is a way to actualize it here and now.

If we want to be, act or think sustainably we have to connect our body and our mind, present, future and past. Being sustainable is more than the attempt to meet the needs of our environment and species living next to us. It is more than caring for each other. Is acting sustainable maybe a promise? The promise to sustain something, to keep it going and stabilize it?

We should think about more than ourselves. Everyday we are making connections or relationships with others. And it doesn’t matter if this otherness is human or non-human. It is the act of being transparent and honest, being approachable and expecting and allowing others to be and do the same. Furthermore we have to except that there were, are and will be moments and situations that extend beyond ourselves.

There is this existing long-lasting interconnectedness between human and nature and we really have to act within this realization of this togetherness. And in the end we also have to try to be emotional and sensitive, to be aware of our surrounding and the places we live in.